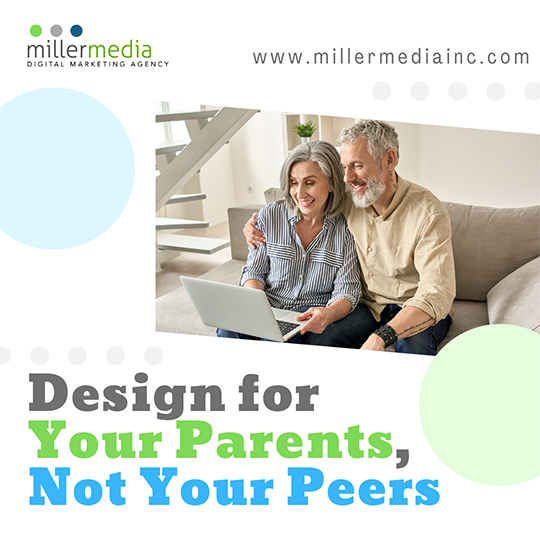 Age-bias is a problem in most tech related web designs. Consumers ages 55 and over are growing in number and control 70% of the wealth in the USA. While there is a blanket assumption that older generations do not want or need to learn how to use technology, they would be extremely wrong to hold onto this assumption. Use user research, conversations, and testing groups to build a design suited for different types of people of an older demographic.

First, start off your web design by design for everyone, in other words, make sure your design is based on the basic principles of UX/UI design. Resist assuming older adults need increased font sizes or that they will be viewing your design on the iPad only. Some maybe near-sighted or far-sighted, some maybe on a laptop, phone, or desktop. Research what goes on in their daily lives and how they use their devices. This will help when you come up with a design with the goal that will direct them to your product or service.

Secondly, for brand elements, imagery, and headlines avoid labeling everything as “Senior” and using cliché photos or illustrations. Not all old adults are bed ridden or on death’s door. Most are self-sufficient and may need a little help here or there in certain tasks. Use imagery that has them active, doing daily tasks, or using your product or service. Also avoid photos with washed out, hazy lighting. For some reason certain photographers think it portrays the “golden years’, but in reality, it looks messy and out of touch. The same can be said of chalky or pastel sketchy illustrations as well. These were fine when the newspaper was the medium but looks dated on digital devices.

Tech illiteracy of older generations is a fallacy and myth that still proceeds, and it is annoying. People 50 and over were the first generations to adopt tech. They bought the first cell phones, played Pong, used the first Mac and Microsoft computers. They didn’t grow up touch screen natives, but that doesn’t mean they didn’t grow up exposed to certain user interfaces. Think about design that trains and builds habits of modern use. For example, the “hamburger menu” seen on mobile website is second nature to younger generations, but old generations may not know the purpose. Instead viewing is as incompetence think of way to meet them halfway. Try labeling the “hamburger menu” as simply “menu” near the graphic. This will let them know where the navigation is as well as make them remember for future websites.

Lastly, while it would be best to hire a digital marketing team with the target audience included in the web design team, that isn’t always possible, or you are not able to tell who is on the team. However, it is possible of testing to be done by the target demographic. LinkedIn, Reddit, local outreach, job boards, email surveys, and more are all available ways to create a testing group for your web design. Take notes on what they found easy or hard. Take these notes to the design and development team to make improvements based on productive feedback.